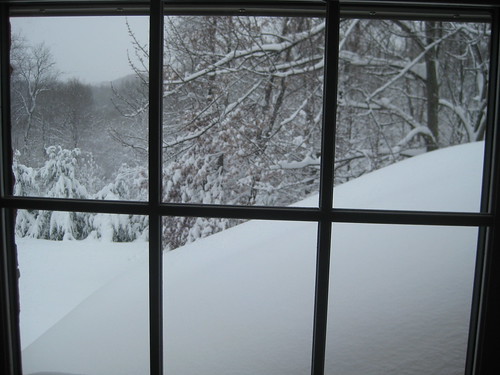 I’m pretty anti-New Year’s Resolutions. They may work for some, but we all feel compelled to make them since that’s the norm. Come February 1, the thought of them will be gone for most who make them.
But, I am for setting goals year ’round. You know how they say to never start a diet on a Monday? Well, the same goes for never setting a “resolution” on January 1. At least in my opinion. However, I do think January, February, and even March are really good months to get stuff done. Why? Well, if you live in a cold climate like I do, you know these are the most miserable months EVER. Standing in the frigid cold scraping snow and ice off my car isn’t my idea of fun. It’s dark and cold outside, so you’re spending a lot of time indoors. Which is the perfect opportunity to tackle projects (and/or goals) you’ve been putting off. Here’s a list of things I plan on doing this winter:
1. Organize pictures

I have a giant box of pictures sitting in a closest at home. They’ve been sitting there at least five years and frankly, I am afraid to even think about organizing them. But, I must. Who wants a giant box of a mess of pictures? My goal is to get them at least semi-organized. First, I’ll spread them out on the floor organized into three sections: high school, college, post-college. Then, buy some albums and put them in there. Then it got me thinking…I haven’t developed pictures in a long time. I take all pics on my digital camera and save them on my computer and as a backup, hosted on my private SnapFish account. Which leads me to part two – which is to go through all my digital photos and print some off to have hard copies of. This sounds like a process, but it will be fun to look back at old pics (at least that’s what I’m telling myself.)
2. Organize contacts
This is another project that I’m dreading, but it is necessary. I have my personal e-mail contacts in Yahoo, my professional e-mail contacts in Outlook under my work account, and a mismash of others in my phone. I need them streamlined into one place, that syncs with my Droid, Yahoo, and Outlook. Been trying to Google how to do this and so far, no dice. This may have to been done manually. UGH.
3. Budget finances
Winter is a good time to take a good luck at the old money situation (or lack thereof). January is great because you just spend mucho dinero on holiday gifts and outfits, and you can now do your taxes once you get that buckets of fun W2 form. So, reevaluate. Get back on track. My dad and I sat down last week and mapped out my budget, which I am now following again after many failed attempts. Then you can do something fun with that tax return. Last year I paid off my credit card with it. This year, I have no credit card debt, so I’m going to save some and perhaps get me an iPad. 😀
4. Organize files

I have a very packed drawer full of files – old credit card and bank statements, my car payment statements, miscellaneous medical documents, pay stubs, etc. It’s getting jammed in there. So after I get those 2010 taxes done, I’m going to go in and pitch everything that’s old and I no longer need (and when I say pitch, I mean shred and recycle).
5. Redecorate
You are spending all this time indoors, may as well make it look good! I am doing an overhaul of my bedroom. I have stuff in there I had in my college dorms/apartment, and I don’t think “shot glass chic” is in anymore (or ever, for that matter). Plus my overflowing closet needs some serious help. Perfect time to donate what you don’t want and bring in what looks good. I’m getting some current inspiration from Cupcakes and Cashmere.
What are you working on this winter?